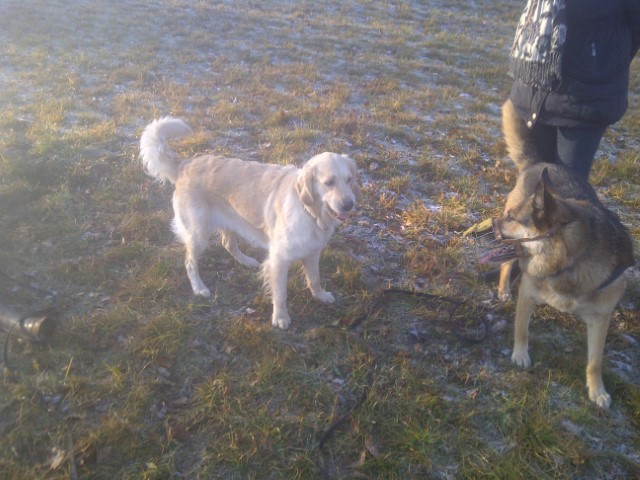 As always, I would like to remain objective and not disregard our German language and current definitions. Especially in the environment of dog education and dog training, it is often formulated inaccurately and/or (badly) copied. This is where badly researched opinions can quickly be found on social media and other sites. So let’s start with the definition of aggression:
Pschyrembel: (engl. aggression)
“Behaviour directed against persons or things with physical or psychological violence, e.g. fear or threatened loss of power, which is both genetically based and can be reactively triggered.
In an older version it was said: “General term for any aggressive behavior of humans and animals directed against other individuals or themselves (autoaggression), which is the processing (defense, reaction) of a previous anxiety state”.
In this context, let us also add the definition of fear:
Pschyrembel: (engl. anxiety, fear)
“an emotional state that is perceived as unpleasant, but nevertheless vital (because it signals a danger), with the central motive of avoiding or defending against a danger and possibly psychological and physical side effects”.
Definition of communication:
Pschyrembel: (lat. communicare)
“Process of information transfer between individuals using verbal and non-verbal means of expression (gestures and facial expressions), whereby, in addition to factual information in the narrower sense, relationships are also defined and complex social messages are exchanged (metacommunication).
Aggression in the animal kingdom

In view of these definitions, I do not see aggression as part of any communication and certainly not as “normal” behavior. Aggression can be seen as part of communication when psychological violence is involved (threatening)
But what is possibly misunderstood?
The dog’s expressive behavior or body language is a fundamental and important basis for understanding the dog and how it communicates. A behaviour that may be misinterpreted by humans as aggressive (expressive), is possibly only part of the communication as calming signals to avoid a physical confrontation in the first place.
“The motivation for exercising aggression is fear and insecurity” – this may be the case, but it does not have to be. See the genetic predisposition.
What does this have to do with dog training?
Well, dogs that attack other dogs while walking are often referred to in general as anxiety behavior (the fear of losing their physical integrity) and this is more likely to be considered than dominance behavior.
As good dog trainers we should consider all possibilities and also differentiate the subtle differences of fear through observation. Especially the sender-receiver model in communication can provide important information here.
Let us stick to the aggression model based on fear and first look at different comparisons to get an understanding of terms:
A person is standing in line at the checkout, the child of the mother in front of him is screaming all the time, the person behind him is bumping into him with the shopping cart for the umpteenth time. The person simply loses his or her nerves in colloquial language, hammers on the handle of the shopping cart and shouts loudly “finally opens another cash register”.
Does this person show aggressive behaviour? By definition, yes, physically against the handle of the shopping cart and psychologically by screaming (counts as psychic violence, although not every individual will be impressed by it)
Is fear the cause of aggression? Well, maybe depth psychologically, but in general I would deny that now. It is rather physiological processes that “burn out your nerves” (exhaustion, stress, etc.)
Another comparison from the practice:
A parent grabs the toddler approaching the edge of the sidewalk, pulls him/her towards him/her with a jerk and slaps or shakes him/her vigorously, possibly yelling at him/her. Probably or maybe, the parent must have experienced such a reaction (i.e. physical rebuke) to act in this way at all. I am not able to judge that now, but it is to be considered as a separate issue.
Here we are definitely dealing with fear. But this needs to be differentiated. Is it, in this fraction of a second, primarily the parent’s fear of losing the child in an accident or the fear that the child might do something “stupid” and run out into the street? So is the fear directly with the parent or is it projected onto the recipient of the aggression? There will probably be a certain combination here, but due to the fact that the child has not yet been on the street, but the possibility has been seen that this might happen (see also the principle of trust in road traffic), a (rightly) lack of trust could create a kind of vicarious fear.
We now have two examples from human behavior and now apply them to a human-dog relationship:

Now why does a dog show aggression behavior towards another dog when it happens out of fear? Is it always the dog’s own fear? Or can it be representative for the owner? Observe your clients closely when dealing with your dog! Take the time to achieve lasting results and keep satisfied clients!
We know that animals and also dogs have a much stronger sensitivity than the adult, stressed person in our modern society. How often it happens that people react with stress in the run-up to such an encounter and transfer this feeling to the dog. In such a constellation, the dog may take over the task of protecting his master or mistress rather than acting out of his own fear.

So yes, fear is a possible cause for aggression, but please always try to differentiate between them.
“In nature you will not find excessively aggressive canids, …” I think this is a very daring and doubtful statement. The “wild” nature is cruel, very cruel! If the offspring of another pack are killed in order not to share the scarce resources, I consider killing to be the peak of aggression. Whether something is “overdone” is always to be seen in context.
There will always be a cause for aggression, which has been found, not only in the scheme of things, but individually! Too often today (especially via the Internet) knowledge is imparted inaccurately or clumsily and too many people then very quickly accept imparted content as “absolute”. The effects can then be observed daily. We are supposed to point out possibilities, even if this is not so easy at all, in written form.

Aggression as part of any communication in dogs?