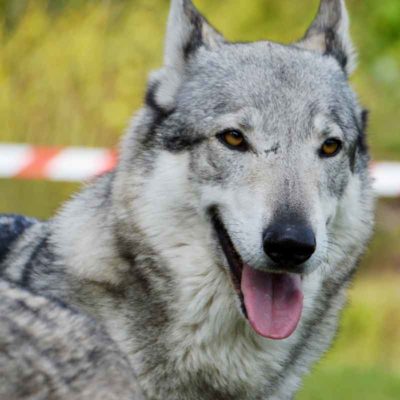 This relatively new breed of dog attracts attention wherever it appears. Czechoslovakian wolf dogs do not have a centuries-old tradition or renowned breeders, yet no one doubts their high, Mother Nature-given rank at the sight of them.

The breed is large, athletic and strong, has smooth and dense wolf-grey hair with a typical white mask and simply looks like a real wolf.

He does not maintain eye contact with his owner, but knows at all times exactly where his owner is and what he is doing. He examines a stranger with his slanted eyes confidently and insistently.

He has an exceptionally well-developed sense of direction, reacts quickly to changes and can run over 100 kilometres without any problems.

The first breedings were recorded in Austria, Hungary and Slovenia. The puppies are imported from the mother countries, the Czech and Slovak Republics. These wolfdogs are regularly presented at dog shows and enjoy great popularity among visitors.

The physique and hair of this breed absolutely and unmistakably resemble a wolf. For males the lowest shoulder height is 65 cm, for a bitch 60 cm. Upper limits are not defined. A characteristic rectangular build in the ratio 9:10 of height to length as well as a complete, scissor- as well as pincer-shaped, strong bite are typical characteristics of this wolf dog breed. The sex must be identifiable by the expression on the head.

The Czechoslovakian Wolfhound has a straight spine with short loin and is strong in movement. A large, rather flat than barrel-shaped chest, as well as a strong and notched belly, also contribute to the majestic appearance. The short back is only slightly sloping and the tail is set high and reaches to the roots of the feet when lowered.

Muscular hind limbs with a long calf and instep, allow a typical and persistent canter. The easy, harmonious movements with long strides are also supported by the straight and closely set front limbs. The forelegs are also characterised by a long radius and metacarpals. The paws are turned slightly outwards.

The temperament of the Czechoslovakian Wolf Dog

The breed is persistent, docile, responsive and also very active and persistent. It is considered courageous and fearless, rather suspicious, but would never attack without reason. It is very resistant to weather conditions, which makes it a versatile working dog and all-rounder.

He shows great loyalty to his owner and is very playful, but without proper leadership his temperamental nature can quickly lead to overtaxing those around him. It absolutely needs experienced dog owners to keep the wolf dog happy, to motivate it and to consistently educate, train and lead it.

These dogs are very independent and can cooperate particularly well and purposefully in a pack. Their senses are remarkable and allow them to pursue their activities, such as tracking and scenting, in all weather conditions and even at night. Independent work of the pack without human intervention was the original thought for the use of the Wolfhound in the army, but a partially required barking in some situations is simply unnatural for this breed, which does not make training easy.

Without some authority from the handler, aggression towards other dogs can occur and it is not very trustworthy towards other pets. There are usually no problems with children and he counts as well tolerated when it comes to his own family, i.e. his own pack.

A Czechoslovakian wolf dog is generally a healthy and robust breed. However, like the German Shepherd, he is prone to hip dysplasia.

With regular and sufficient exercise, he can cope in a flat, but consistent adherence to shared ktivities with the dog is absolutely necessary. This breed does not forgive carelessness, which is why a garden or a generally more rural environment in the middle of nature is certainly more suitable.